Posted by Jake Ehrlich 739sc on 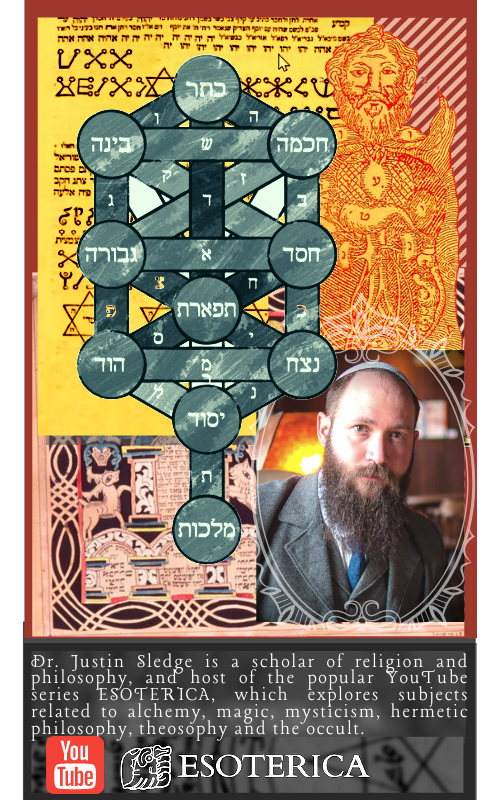 Spend your summer getting acquainted with 2000+ years of Kabbalah and Jewish mysticism, with Dr. Justin Sledge!

We are excited to host another class with the sought-after educator Dr. Justin Sledge, host of the popular Esoterica YouTube channel. This time, we're tackling a subject of much interest and fascination: the Jewish mystical tradition.

The mystical dimension of Judaism has endured from Israelite shamans to contemporary times.  This 10-week class will serve as an introduction to the major concepts, texts and traditions of Jewish mysticism, especially the Kabbalah.  No prior knowledge of Jewish mysticism is required or expected.  The aim of this class is to equip you to dive into aspects of Jewish mysticism you find most interesting on your own.  Hopefully it will be interesting and fruitful for both folks interested in the history of Jewish thought academically but also for anyone wishing to deepen their relationship with the history for Jewish spirituality.

This series is held in partnership with the Isaac Agree Downtown Synagogue and the Reconstructionist Congregation of Detroit, and is partially sponsored by the D. Dan & Betty Kahn Foundation

Dr. James Justin Sledge is a professor of philosophy and religion at several institutions in the Metro-Detroit area, popular local educator, and host of the popular Esoterica YouTube channel. Dr. Sledge was born and raised in a proud working-class Mississippi family.  He learned the fundamental value of labor from his father who was a pipe-fitter and the crucial  importance of un-waged labor from his mother. A first generation college student, Dr. Sledge earned his undergraduate degree at Millsaps College then went for a DRS in religious studies (Western Esotericism and Related Currents) at the Universiteit van Amsterdam and a MA and PhD in philosophy at the University of Memphis.

​He is currently preparing material on the Ancient Near Eastern Prophetic Tradition, spirit possession in the early modern Jewish world, and is slowly working through the Zohar (which he will be doing the rest of his life).​ Outside of his academic and YouTube work Justin is a calligrapher, home brewer, Go player, DM, HAM radio technician (KE8NAW) and habitual trouble-maker. He lives in Detroit, Michigan with his amazing partner Rabbi Alana Alpert, two kiddos, and pup Mississippi.

⬇️Please use the form below to RSVP by 6/19. We will send out Zoom access info closer to the event. If you have any questions, feel free to email Jake at [email protected] ⬇️