"The End is Just the Beginning" - Intro to Jewish Apocalypticism

Posted by Jake Ehrlich 731sc on

You asked, we answered. The inimitable Dr. Justin Sledge returns for another one of his beloved Jewish learning courses. This time, with a theme relevant to our current era: The Apocalypse.

Join us for a 4-week course on some of the weirdest and wildest texts on the edges of the Jewish literary canon - and beyond. 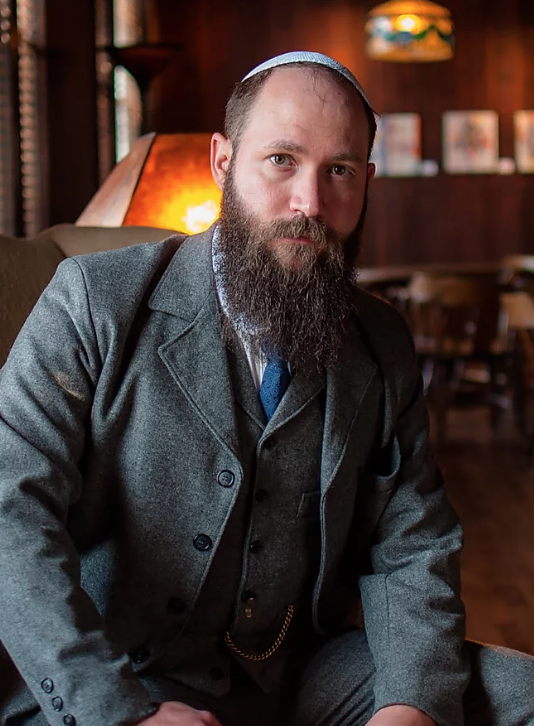 Dr. Sledge writes: "The word ‘apocalypse’ summons to mind some of the most terrifying religious ideas: world-engulfing wars, supernatural creatures falling to earth, natural forces ripping the world asunder, and the very end of the cosmos itself. These notions have their origins in the most dramatic and colorful literature in all of Judaism. We will look at the Biblical Book of Daniel, the Book of Enoch, the catastrophic War Scroll in the Dead Sea Scrolls, the Book of Jubilees, mysterious gnostic literature, the nightmarish Book of Revelations in the Christian Bible, and others. Come and learn about this bewildering literature!"

Dr. Justin Sledge is a professor of religious studies and philosophy, a scholar of esoteric and magical traditions, the host of the Esoterica podcast, and the husband of Rabbi Alana Alpert.

WHO: This course is open to the public. T'chiyah members may take this course for free; non-members are asked to make a per-session suggested donation rate of $10/session. (No one will be turned away for lack of funds).

WHAT: 4-weeks of lecture and discussion led by Dr. Justin Sledge. At-home readings will be assigned, for which texts will be provided digitally. Drop-ins are welcome as well.

WHERE: Online! We will send you the link and access information following your RSVP.

WHY: Though we can't prescribe these texts as having direct relevance for coping with the strife of the COVID-19 pandemic, these texts offer insight into how our ancestors have responded to and thought about catastrophe. Who wouldn't want to probe into our ancestors' troubled psyches? Plus, anyone who's taken a course with him knows that Justin makes the arcane and obscure hilarious!

Use the RSVP form below to sign-up for more info and updates. You will be sent access info following your RSVP.

"The Daniel reading is pretty short but the footnotes are super important so make sure to read along with them.  The Book of Enoch is pretty long and somewhat intimidating.  My advice for reading it would be to just skip around.

Major themes in that text include the origin of evil (the fall of the angels which in the Enoch story has to do with lust rather than rebellion against the divine) and the nature of the cosmos.  Feel free to skip around the text, skim it at while, or read it straight through.  The text is actually several books loosely edited together so skimming about is totally fine.  Lastly the War Scroll is from the Dead Sea Scrolls and imagines a final catastrophic battle against the Romans (who the text calls the Kittim).  What's interesting here, among other things, is the interest in banners, trumpets, and the role of priests in the battle."

Without a doubt I Enoch is one of the more complicated texts in ancient Jewish literature.  With that in mind it may be helpful to know that scholars usually parse it such:
Generally scholars take it that the earliest strata of the text is the "Apocalypse of Weeks (91:12-17, 93: 1-10) and the Visions (12-16) with these dating to the pre-Maccabean period (so prior to 167 bce) with the other texts being written sometime no later than 100 bce when the composite text can roughly be dated from the Dead Sea Scroll fragments.
The oldest Ethiopic manuscript (in Ge'ez or classical Ethiopian) known of the Book of Enoch was copied in the first half of the fifteenth century and denoted as MS Lake Tana, no. 9 though fragments survive in the Dead Sea Scrolls and a few Greek and Latin fragments.  It is also worth noting that Enoch is considered canonical (as genuine scripture) by both Ethiopian Christians and the Beta Israel or Ethiopian Jewish community.
If I Enoch interests you, there's great news - There are two more books of Enoch with 3 Enoch representing a whole new form of mystical literature - the Merkabah (chariot) mysticism!
Looking forward to chatting about Enoch next week!

As we wrap up this unfortunately short exploration of the apocalyptic I would like to turn to early Christian apocalyptic thought.  Of course, the boundary between early Christianity and Second Temple Judaism is quite porous so these texts could also be thought of as Jewish as well.
The first text would be the Apocalypse of John sometimes called the Book of Revelations.  Any Bible translation here will do but I very much recommended the NOAB for its notes and diplomatic critical apparatus.  I am going to make the argument that this text is the most 'Jewish' of all texts in the New Testament.
The next text is Apocalypse of Paul with its tour of the heavens and hells which would go on to influence not only Dante but very likely Beowulf.  This text probably had more of an impact on conceptions of the afterlife than any other text in western history.
Finally, and as something of an appendix I am attaching the major work of the contemporary apocalyptic theologian and messiah David Koresh.  This work was written during the 51 day siege in 1993 by federal forces that ultimately led to the deaths of 4 federal agents and 82 Branch Davidians.  It was this text and its revelation that stood between Koresh and Federal negotiators and I'll talk a bit why this text matters so much in the context of the apocalyptic but also in our contemporary religious setting.
WHEN
May 20, 2020 at 7:00pm - 8pm
WHERE
Zoom!